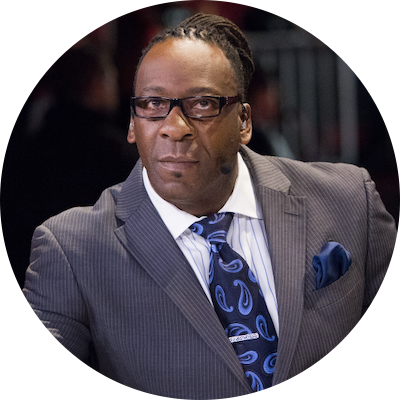 Booker T is an 11-time WCW Tag Team Champion, a six-time World Champion, winner of the 2006 King of the Ring Tournament and the man responsible for popularizing the word, “Sucka!” in sports-entertainment. He also bears the distinction of holding the WCW World Heavyweight Championship when the promotion folded in 2001.

From the moment he stepped into the WWE ring, Booker T Spinaroonied his way into Superstardom, tangling with a who’s who of squared circle greats, including “Stone Cold” Steve Austin, The Undertaker, John Cena, Triple H, Randy Orton, Batista, Rey Mysterio, Ric Flair, Christian, Mark Henry and many others.

In 2001, as a member of The Alliance, he cost “Stone Cold” the Undisputed WWE Championship. In 2002, as a tag partner with Goldust, he launched one of the most outrageously funny tandems in WWE history. And in 2006 as King Booker, he delivered what’s widely considered the best faux British accent since Kevin Costner’s turn as the Prince of Thieves in “Robin Hood.”

Can You Dig It Sucka?! Booker T Joins Us

Today on the show, Battle and Eli sit down with 2X WWE Hall of Famer, 35X Wrestling Champion and Founder of Reality of Wrestling, Booker T! Booker tells us about ROW's big show this weekend in Vegas. Booker T also talks about former guest of the show...